For the last few days, a swarm of earthquakes originating from Mt. Keilir has rocked the southwest corner of Iceland, including the capital Reykjavík.

Earlier this year, a series of earthquakes shook the Reykjanes Peninsula and Reykjavík for three weeks before lava broke through at Fagradalsfjall Volcano.

Now, seismic activity has begun again. This time it is southwest of Mt. Keilir on the Reykjanes Peninsula and it is rocking the capital, Reykjavík,  and nearby towns.

The seismic activity has been considerable since the swarm began on the 27th of September. Ten quakes over the size of 3.0 on the Richter scale have occurred; the biggest one, measuring at 3.7, took place today around 11:30 am.

Scientists at The Department of Civil Protection and Emergency Management have advised people not to travel to Mt. Keilir or its vicinity.

Iceland sees two main types of earthquakes, those caused by tension released from the tectonic plates and those caused by the underground flow of magma. Þorvaldur Þórðarson, professor of volcanology and geology at the University of Iceland, believes that these earthquakes are most likely the result of the latter.

Scientists are waiting to receive further data to assess what is happening at Keilir. The latest measurements of crustal movements show no apparent signs that magma is breaking its way to the surface. However, magma can still be on the move at depths not visible in the measurement data.

Mt. Keilir is a cone-shaped, volcanic mountain located southwest of Hafnarfjörður Town. It is perhaps one of the most recognisable landmarks on the Reykjanes Peninsula and is clearly visible for those travelling between Reykjavík City and Keflavík International Airport.

Mt. Keilir was formed during the last Ice Age in a volcanic eruption underneath an ice sheet, which led to its distinctive cone shape.

Similar Events that lead up to Fagradalsfjall Eruption

The current earthquake swarm is very similar to the one that occurred before the eruption of Fagradalsfjall Volcano in March of this year.

Scientists have estimated that a magma tributary, or a tunnel of lava between magma chambers, leads from Mt. Keilir to Fagradalsfjall Volcano. The current earthquakes originate directly above where the scientists believe that tunnel to be.

New measurements confirm that no lava has flowed from the eruption crater at Fagradalsfjall since September 18, or for almost two weeks. This is the longest break in the eruption since it began on March 19th. Glowing lava has been seen in the area, however, experts say it did not flow out of the crater, but is just old lava moving around.

A change in the eruption’s behaviour in conjunction with increased seismic activity at Keilir could mean that magma is seeking to go somewhere else.

“So we continue to follow developments closely, and scientists and search and rescue teams are prepared if magma reaches the surface of Keilir.” So says Sara Barsotti, director of volcanic danger at the Icelandic Meteorological Office.

Steam rising from the Ground

Earlier today, steam was spotted rising up from the ground near Keilir as you can see in the video below (enter full screen for whole video).

However, that doesn´t necessarily mean an eruption has begun. According to Elísabet Pálmadóttir, a natural disaster specialist at the Icelandic Meteorological Office, there is no need to worry just yet.

“This is a known temperature zone. So it may well be that the earthquakes move the area around, and then the geothermal activity can increase”, Pálmadóttir said. She further adds that similar smoke is known in this area.

Earthquakes in East Iceland could mean eruption in Askja Volcano

Seismic activity has also been increasing in Askja Volcano in East Iceland for the last two months. In addition, an ongoing surface uplift has been observed for the previous few months.

In consultation with the Chief of Police in Northeast Iceland, the National Police Commissioner has declared an “uncertainty phase” in the area.

The most likely explanation for the uplift is magma accumulation at a depth between 2-3 km. Such surface uplift can culminate in a volcanic eruption. However, that does not mean that an eruption is imminent. The magma might cool and congeal without ever reaching the surface.

Scientists in the area keep monitoring the situation. 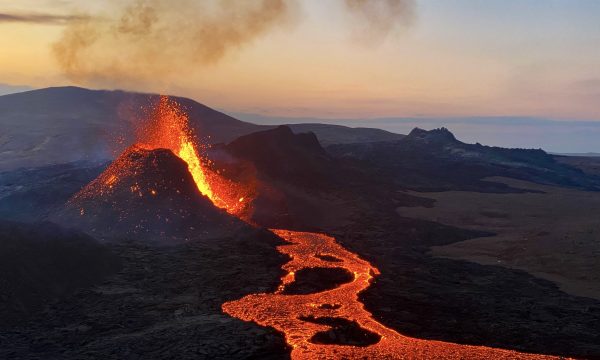 Another Eruption Imminent Near Reykjavík?