After three weeks of constant earthquakes, lava has finally broken through the ground in a volcanic eruption on the Reykjanes Peninsula.

Over 30,000 earthquakes had rattled people in southwest Iceland since February the 24th. Most scientists agreed that the reason for these quakes was magma moving underground. The main question, however, was; will the magma break through the ground?

Well, it did on March the 19th. Shortly before 10 PM, the Icelandic Meteorological Office received a notification that the sky near the possible eruption zone had turned red. It was later confirmed that an eruption has begun in Fagradalsfjall Volcano.

The eruption at Fagradalsfjall Volcano on the Reykjanes Peninsula marks the first eruption in the area since the 13th century.

Historically, the peninsula’s eruptions have been slow lava flow eruptions but not big explosive ones like we saw in 2010 with the Eyjafjallajökull Volcano.

This means that currently, there is no need for the nearby Grindavík town to evacuate and no need to halt any air traffic.

It is not known how long this eruption will last. Scientists say it can last from just a few days to hundreds of years. The last time there was volcanic activity on the Reykjanes Peninsula, it erupted periodically between 1211-1240.

Fagradalsfjall is a tuya volcano. This type of volcano is distinguished by its flat top and steep sides. Tuya Volcanoes are formed when lava erupts through thick ice sheets or a glacier, which makes them rare worldwide but not here in Iceland.

The volcano is located on the Reykjanes Peninsula, about 50 km (31 mi) from Iceland’s capital, Reykjavík. It is around 385 metres (1263 ft) tall and is thus considered the tallest mountain on the peninsula.

It is believed that it was created during the ice age when a glacier covered the area and an eruption occurred underneath it.

How to pronounce the name of this Icelandic volcano?

In 2010, a volcano on Iceland’s south coast erupted. The name of that volcano (Eyjafjallajökull) stumped news reporters from around the world.

This new volcanic eruption takes place in by the mountain Fagradalsfjall (literal translation: Beautiful Valley Mountain) in Geldingadalur Valley (literal translation: Valley of Castrated Sheep…not quite as pretty as the other one). To help out reporters looking to cover the story (and those looking to impress their friends), we’ve made audio clips with both of these sites’ correct pronunciation.

Is the Volcano in Iceland Dangerous?

The eruption of Fagradalsfjall Volcano is considered a relatively small one and poses no immediate danger to settlements, neither in Reykjavík nor those closer, on the Reykjanes Peninsula. However, all volcanic eruptions pose a certain risk, especially to those who venture too close to the eruption site.

Since the eruption began, there has been a steady flow of visitors to the site. Although most have behaved responsibly, there have been few that do not. Some go too close to the boiling hot lava others have come ill-prepared for the long hike required to reach the eruption zone.

Visitors need to remember that this is wild nature, and it is unpredictable. Fissures can still form in the ground near the eruption, and the lava can change direction. There is also a risk of gas pollution increasing suddenly.

People also need to keep in mind that March in Iceland is considered wintertime and should prepare accordingly when embarking on the hours-long trek to the volcano. This means proper wind and waterproof clothing, good hiking boots, GPS-system, torches, and refreshments.

When news broke out that a volcanic eruption had begun on the Reykjanes Peninsula, the people in Reykjavík got excited. Social media lit up, and bars in the downtown area dedicated their playlist to fire-related songs. The city is far enough away from the volcanic eruption for anybody to worry about it.

There is, however, a town on the Reykjanes Peninsula much closer to the eruption zone. Grindavík is a small fishing town with a population of around 3,300 people. It is located about 11 km (6.8 mi) from the volcano.

We spoke to Nanna Höjgaard Grettisdóttir, a resident of Grindavík, about how townspeople react to the volcano.

On the night of the eruption, Grettisdóttir could see the glowing red beam from the lava lighting up the sky near her house. She could even feel the air getting more and more smoky.

However, she was not scared. Around three weeks before the eruption began, 30,000 earthquakes had hit the area, indicating that a volcano was about to go off. So, Grettisdóttir knew this was bound to happen.

In fact, she was relieved because an eruption meant that the earthquakes would stop. Although not all 30,000 tremors could be felt, there have been plenty of larger quakes that have rocked the town of Grindavík (including the Blue Lagoon) in the last few weeks.

According to Grettisdóttir, living with earthquakes is worse than living near a volcano. The people of Grindavík were losing sleep as the quakes would often wake them up in the middle of the night. Many had booked hotel rooms in faraway towns to get a break from the constant rattling.

Grettisdóttir was not so worried about herself but her 6-month old puppy, Púmba, who got scared every time the house shook. But now the earthquakes have seized, and poor Púmba can rest easy.

Though the night’s sky is red in Grindavík, the lava flow is too far away from the town to pose a danger. Furthermore, there has been very little gas emitted from the volcano. However, residents are advised to keep their windows closed and only stay out for a short period, just in case.

Below are pictures and videos of the 2021 volcanic eruption of Fagradalsfjall Volcano in Iceland.

Live Stream from the Volcanic Eruption in Iceland

Below is a live feed from The Icelandic National Broadcasting Service (Rúv) of the Fagradalsfjall Volcano in Geldingadalur Valley. 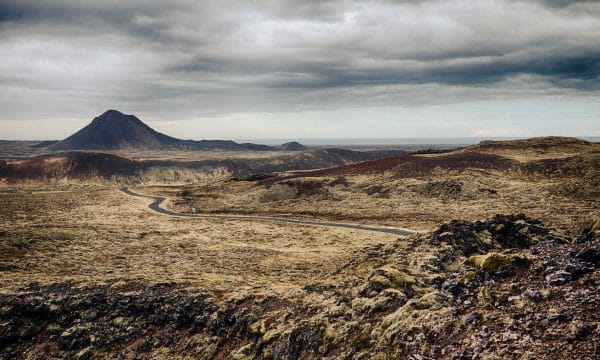 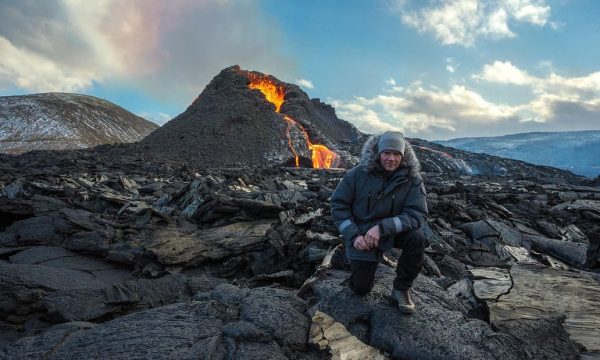 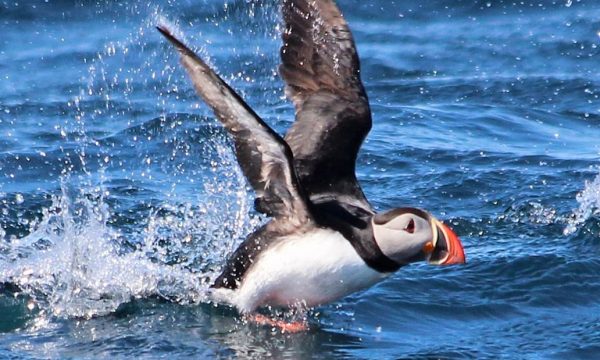